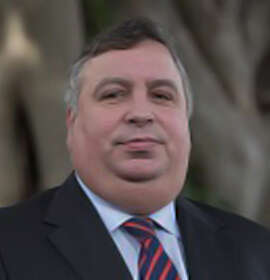 Joaquim Pedro Cardoso da Costa was born in Coimbra in 1965. He holds a bachelor’s and a master’s degree in Law (University of Coimbra), is assistant to the Faculty of Law of the University of Lisbon and is legal expert at the Centre for Fiscal Studies. He was a State Secretary for the Administrative Modernization of the XIX Constitutional Government. As a legal expert, he worked in the offices of the President of the Republic, the President of the Parliament, the President of the Constitutional Court, the Minister of Justice, the Minister of the Sea, the Representative of the Republic for the Autonomous Region of Madeira and the Judges of the Constitutional Court. He was a lecturer at the Universidade Católica Portuguesa, at the Universidade Autónoma of Lisbon, at the Higher Institute of Police Sciences and Homeland Security and at the Military Academy.