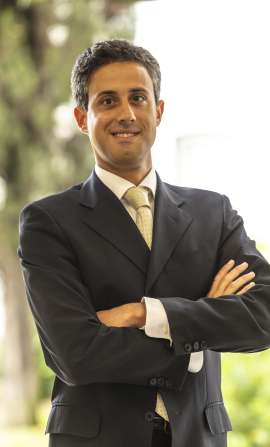 Ravi Afonso Pereira was born in Lisbon in 1981. He graduated in Law from the Law Faculty of the Universidade Nova de Lisboa (2004), where he is currently completing his doctoral dissertation. He is a researcher in the areas of Constitutional Law, Administrative Law and European Constitutional Law, and author of scientific articles published in Portugal and abroad. He was a lecturer in the Master’s Degree “Justice: Legal and Meta-Juridical Perspectives” at the Nova University of Lisbon Law School (2011) and in the Undergraduate Degree of the Lisbon School of the Portuguese Catholic University Law School (2016-2019). He was a visiting researcher at the Max-Planck-Institut für ausländisches öffentliches Recht und Völkerrecht (2006, 2007-2009), at Yale Law School (2007) and at Humboldt Universität zu Berlin (2006-2007). He was Advisor to the Office of the Judges of the Constitutional Court (2009-2012) and to the Office of the Vice-President of the Constitutional Court (2012-2016). He was Assistant to the Office of the Ombudsman (2018-2022). He was a member of the Technical Commission that drafted the “Draft Law on Protection in Public Health Emergencies” (2021). He was a member of the Scientific Council and Executive Advisor of the Meeting “Which democracy?”, of the Francisco Manuel dos Santos Foundation (2015-2016). He has been Deputy Ombudsman since November 2022.