In 2019, therefore, the activity indicators returned to be the highest in the history of this independent state body, created in 1975 to defend people who feel harmed by unjust or illegal acts of the administration or other public powers or who see their fundamental rights violated.

These data are included in the Report to the Assembly of the Republic – 2019, delivered today, accompanied by the annual report on the activity developed by the Ombudsman as a National Mechanism for the Prevention of Torture.

Breakdown of complaints by topic(i)

In terms of the most addressed themes, Social Security complaints once again dominated, which in 2019 represented 36% of the total number of complaints processed, after an increase of 21%, followed by increases of 39% and 37% in 2018 and 2017 respectively. Compared with 2016, the number of complaint procedures on issues related to social protection schemes more than doubled, with complaints on delays in pension processing and payment continuing to stand out in 2019.

Also as in previous years, the second most dealt with subject refers to Public Employment Relations (11% of the total complaints investigated), followed by Taxation (10%). These three major areas – Social Security, Public Employment and Taxation – absorbed almost 60% of the instructive activity of complaints in 2019.
Looking more closely, the ten most targeted issues in complaints were: conditions for access to and calculation of old-age pensions (664 complaints); contributions, contributions, debts, restitution of contributions and undue benefits (642); requirements for access to survivor’s pension and other death benefits (458); rights of foreigners (428); health (357) which, after strong growth of 38% in relation to the year 2018, reached its highest value ever, in particular due to complaints about delays in the payment of ADSE co-payments; tax executions (356), in particular those ordered by the Social Security, which led to an inspection on the ground of half of the Country’s Executive Process Sections; packages of electronic communication services (260); disability and dependency (256), which led to recommendations, already issued in 2020, on Social Provision for Inclusion and multipurpose attestations; education (254), also the subject of recommendations aimed at extending school textbooks to all families that had proven to be in need; and IRS (223 complaints), in a year in which it was possible, after a decade, to achieve a goal around which different Ombudsman office holders had fought: a fairer tax solution for taxation of income from previous years received late, namely pensions.
In total, these ten issues represent approximately 40% of the total complaint procedures opened in 2019.
Breakdown of complaints by entity addressed(ii) 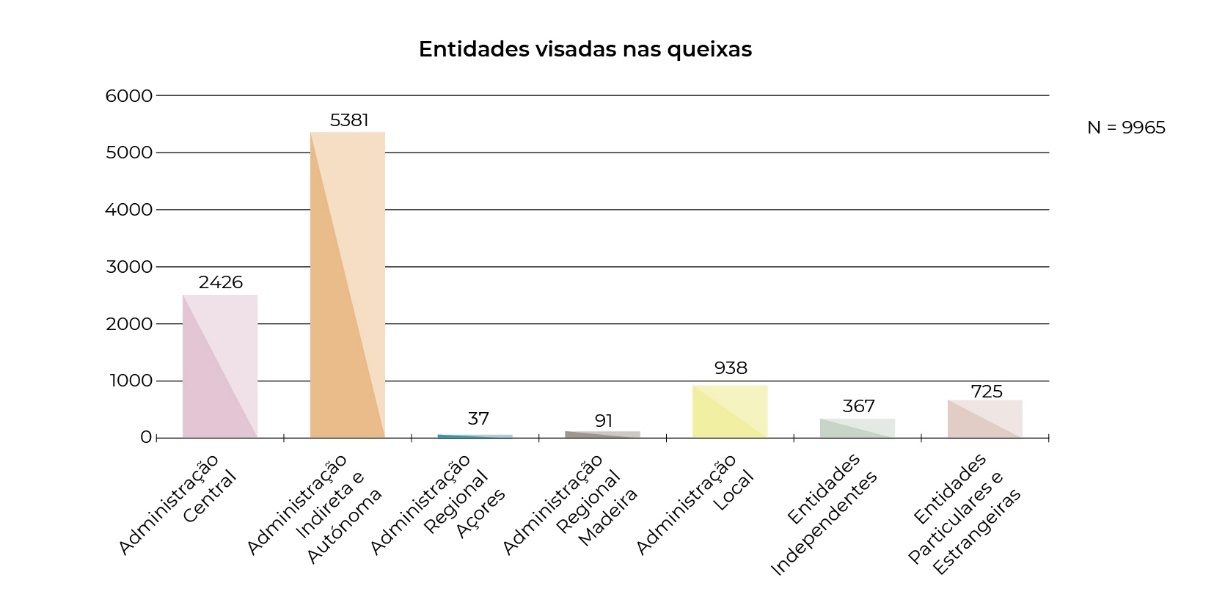 Also as in previous years, the second most dealt with subject refers to Public Employment Relations (11% of the total complaints investigated), followed by Taxation (10%). These three Complaints increased throughout 2019, targeting entities registered with the Indirect and Autonomous Administration, targets of 54% of the total cases, with emphasis once again on the Social Security Institute. The number of complaints addressed to entities belonging to the Central Administration decreased their relative weight in relation to 2018, from 27% to 24%.

Throughout 2019, face-to-face or telephone assistance was provided in 10,813 situations, to which the activity of the Nucleus of the Child, the Elderly and the Citizen with Disabilities was added. This Nucleus, N-CID, which comprises three telephone lines, nationwide and free of charge, dedicated to the personalised attention of the most vulnerable population, received a total of 4108 telephone calls, 5.7% more than in the previous year. The most significant increase, of 7.4%, was observed in the calls received by the Senior Citizen Line.

In Portugal, the Ombudsman is also a National Human Rights Institution, and is responsible for promoting and defending human rights and ensuring that the Portuguese State complies with the international conventions that it has signed in this field. In 2019, the Ombudsman received Michelle Bachelet, United Nations High Commissioner for Human Rights, and presented, in this capacity, alternative reports to the international bodies of the United Nations on respect for the rights of the child, on torture and inhuman and degrading treatment, and also on the implementation of the International Covenant on Civil and Political Rights. The Ombudsman was also heard by the Committee on the Rights of the Child, the Committee against Torture, and the Universal Periodic Review mechanism.

Within the scope of the activity of the Ombudsman as the National Mechanism for the Prevention of Torture and Degrading Treatment (MNP), which completed six years of existence in 2019, re-evaluation of the country’s prison establishments was practically concluded. Some visits were also made to police detention sites. In total, in 2019, the MNP visited 45 places of detention without prior notice, three more than in 2018, and also increased the average duration of visits.  A protocol was also signed with the Ordem dos Médicos (Medical Association) which allowed monitoring of psychiatric clinics within the prison system to begin.

The Ombudsman addresses to the competent bodies any calls for attention, suggestions and, finally, any recommendations she considers necessary to prevent and remedy injustices.  During the year, the Ombudsman addressed three recommendations. In one case, that of the recommendation to amend Law no. 32/2008 on the retention of data generated or processed in the context of the provision of communications services, the Constitutional Court was subsequently requested to abstractly review the constitutionality of articles 4, 6 and 9. As the National Mechanism for the Prevention of Torture, two other recommendations were addressed on Temporary Installation Centres and Equipped Spaces and on mental health care and contacts with the outside in Educational Centres.

The process of compensation for the seriously wounded in the fires, which began in March 2018, is also practically complete. A total of 187 requests for compensation were admitted and sent to the National Institute of Legal Medicine and Forensic Sciences, which qualified 75 people as "seriously injured", and at the time of presentation of this report the proposal for compensation was not completed in a single case (which has already received interim compensation). In total, the Ombudsman’s decisions on the compensation to be paid by the State to these 75 seriously injured people amount to approximately EUR 11 million.

The process of compensation for the relatives and heirs of the five fatal victims of the collapse of Municipal Road 255, which occurred in Borba on 19 November 2018, was fully concluded in June 2019. Nineteen applicants filed claims for compensation, all of whom accepted the proposals presented by the Ombudsman. In total, the compensation paid by the State is around 1.6 million euros.

"The action of the employer state, the insurance state and the tax state cannot continue to consume almost two thirds of all the Ombudsman’s activity. The excessive thematic concentration of the Ombudsman’s activity around the same three areas that have always concurred in the essentials of his intervention, if it is to be maintained, will prevent the institution from continuing to be what it should be: a reliable reflection of the changing social landscape and, therefore, an effective instrument of communication between the State and society".